I've made some minor improvements to the website for selling magazines.

Now on the magazine issue page, a list of any members selling that issue will be shown on the page with location details and a button to contact the member.

People still need to register on the site to send a message. This is to (hopefully) prevent spamming. 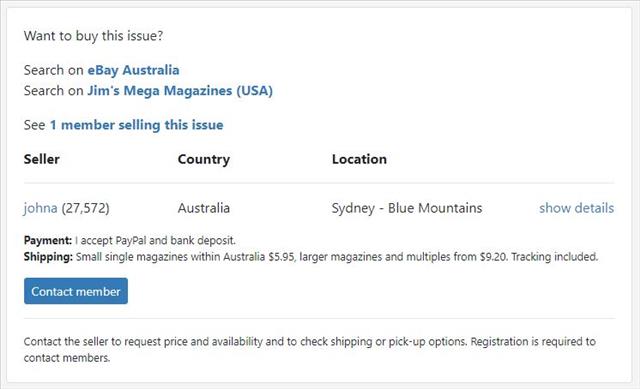 I have made some minor improvements to the search function today.

Searching a specific publication for an article or topic would usually take a very long time and often return an error page. I have improved this so it is now much quicker and there shouldn't be any errors.

I've also added the ability to search by year range: either a minimum year or maximum year or both. The only issue with this is that magazines without a year (eg. magazines that are undated) will be excluded from searches with a year range.

I found another issue with the search function which I have fixed. Results should now be improved.

I have also been experimenting with an improved layout for the magazine issue details page. Feedback welcome.

I finally got around to doing something I should have and meant to do 5 years ago... When you click on a have/want/selling button to update your collection it now happens without a page reload! A small but important feature I think.

I've also made some improvements to better use the newly added publication predecessor/successor data. @bw2520 suggested improving how publications that changed names show that there are older or newer issues available under a different publication, so now I show this at the beginning and end of the publication's list of issues.

I'm also (still) working on some ideas to allow people to buy and sell through they site somehow, and add some functionality to help sellers manage their stock of items they have for sale, produce invoices, request Paypal payments, import/export data, etc. I would also like to better cater for people (like me) who have surplus issues they would like to swap for issues they want, and also for people wanting to sell bulk issues.

Lastly, I am thinking of offering a service where people can donate car magazines in the interests of having them added to the website. Members in different locations could request to be listed as someone magazines could be donated to and in exchange for receiving free magazines from people who don't want them but don't want to throw them away, the member could add them to the catalog and then do whatever they wanted with them (keep or sell or whatever).

Some good ideas for future updates to the system particularly the one to cater for swapping surplus issues for issues that are wanted. At the museum we have just collected a donation of two trailer loads of motor magazines(about 3,500 issues) that we would happily swap unwanted issues for magazines such as RCN and Chequered Flag to complete our own collection.
I am sure that we all have surpluses and wants and this would be an effective way to to help each other.

hey bw250/brian, i checked if you had any custom kitcar mags listed on your selling page but no luck. if your trailer load has any let me know or check my want page for issues wanted. seems like you struck the mother load.
Johna - congrats, some very good new features you have provided, thanks rod

Thanks for the feedback.

Today, I've reinstated an old feature and updated it as a starting point for trading.

If one member is selling a magazine and another wants that same magazine, the website will show a notification in the black bar at the top of any page when logged in. This links to a trading opportunities page that lists matches by member. It's then up to you to make contact with the other member if you want to discuss buying, selling or swapping.

So make sure you indicate issues you want to buy and want to sell to use this feature.

Sorry, no kitcar magazines but I will keep an eye out for any that come in. As well as my own collection, I am the librarian at The Australian Motorlife Museum (member: motorlife) and am progressively loading our collection to magazinecollector.