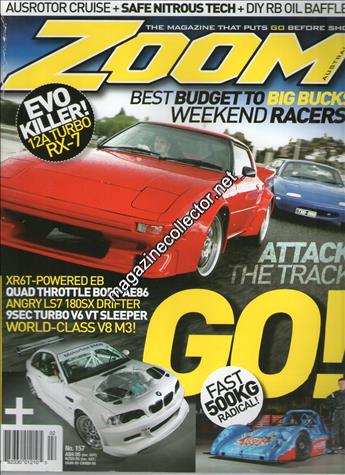 On this page
edit issue

FEATURES
• ON THE ATTACK
Nick Johnson has built his Mazda RX7 to attack the track and smash the smug grins off EVO owners' faces
• THE NEXT LEVEL
Production Sports Cars like this Radical SR3 take track day speed and excitement to a much higher level
• FORECAST - TURBULENCE
Jim Tatsis has built a hard core nine-second Holden VT Commodore that takes the sleeper award this issue
• CROSS BREED
Pure V8 grunt housed in a Japanese sports car shell makes John Clark's Nissan 180SX track car one hybrid you don't want to mess with!
• ADMST
It's refreshing to see an Toyota AE86 styled without a 'panda' paint scheme and tofu delivery stickers
• BLITZKRIEG
BMW went to war with Porsche in the early 2000s and built the E46 M3 GTR. A world-class engineer in Australia and a BMW dealer joined forces to build their version of this track-based weapon
• BACKYARD ENGINEER
Daniel Thompson installed a Ford BA Barra turbo into his EB Falcon mainly to prove that he could

TECH
• BUDGET RACERS
Want to rip it up around the race track but don't want to mess up your daily? Well, how about building a dedicated race car?
• TORSEN TAILS
Track, drift or kahana, no LSD, no fun!
• ON THE BOTTLE
Nitrous oxide isn't just for celluloid racers
• NO LONGER BAFFLING
Does your circuit-based Nissan RB26-powered weapon suffer from oil overload in the rocker covers?

See something wrong or missing? You can help by editing this issue.
edit issue

Want to buy this issue?

+ Add to collection
+ Add to wishlist
+ Add to selling