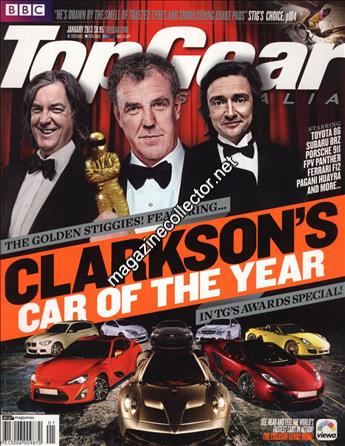 • JAMES COTY
May needs to get from Europe's highest road to the beach, all in one day. There's only one car for the job: McLaren's 12C Spider
• DREAM-ON CAR
Iconic Ferrari test driver Dario Benuzzi shows us his favourite test route. In a Ferrari F12. We've had worse days at the office.
• LIFETIME AWARD
It's the car every maker wishes it had thought of first. We salute a hero that's gone about its business in a non-shouty way. (Volkswagen Golf)
• THE ODD COUPLE
BMW M135i, Porsche Boxster. Hatch versus roadster, turbo versus no turbo, but which one delivers the purest thrills?
• FUN-EST CAR
We take eight sports cars to the glorious roads of Victoria's Lake Mountain to see which one puts the biggest grin on our faces. (Subaru BRZ, BMW M135i, Porsche 911 Carrera, Audi RS5, Renault Megane RS 265, Porsche Boxster S, Toyota 86)
• RICHARD'S COTY
The Pagani Huayra is irrelevant and vastly out of reach for most of the world's population. Does that bother Richard? Not a bit.
• GT OF THE YEAR
We roll out the red carpet for the biggest, meanest and noisiest large cars on the market. Pish-posh to fuel economy.
• JEREMY'S COTY
Not much gets the Clarkson seal of approval, but what's his pick of 2012? If you're thinking 'obviously a supercar', prepare for a shock.

THE NEWS
• MAN, OH CAYMAN
New Porsche Cayman. Like the lovely new Boxster, but with a roof. And better. And stiffer. And faster. Can you tell we're a bit excited?
• SUPER-SEDAN
Ahoy! An all-new Quattroporte, the first in a decade. Bigger, lighter, twin-turbo V8, still the coolest name in Sedan World.
• LAMBORGHINI ROADSTER
Find the standard Adventador far too tame, quiet and cheap? You need its deranged 350km/h drop-top cousin, you mad billionaire.
• BACK TO BLACK
Deep in Mercedes-Benz's AMG lair lurk the deranged 'Black Series' boffins turning their evil scalpels to the gullwinged SLS.

PLANET TOP GEAR
• ICE MAN
Ranulph Fiennes is about to ski across Antarctica in winter, with only a few modified Cat trucks for company. We meet him.
• FALLING STAR
How many kW does a falling Austrian produce? Quite a lot, it turns out, as Top Gear turns its maths brain to Felix Baumgartner.
• MEN OF THE YEAR
We crown our motoring heroes of the past 12 months, from stunt riders to Olympic champs. Salute the petrolheads supreme!
• RH ICONS
Richard dons his finest beret, adopts a Gallic shrug and enjoys la vie en rose in the madder-than-a-bag-of-actresses Citroen DS.
• MAY'S PUB GUIDE
0-100km/h times: the simplest settler of car pub arguments, right? It's a bit more complicated that that, explains Captain Slow.

OPTIONS LIST
• FLY BY
Literally rise above your commuting problems with the Parajet Paramotor.
• WATCHERS
Very rarely, a branded watch is cool. Much more rarely three come along at once.
• REVIEWS
For once, TG reviews a book with actual words and minimal pictures. Brain gain.

Want to buy this issue?

+ Add to collection
+ Add to wishlist
+ Add to selling